We walked towards the Ocoee River as the mist dampened our skin and hair. We carried the rafts down to the edge of the frigid, angry river that moved gallons upon gallons of water down the river every second. The frothing and churning water deafened us to any other sound. Our guide had told us this would be the worst part, and I thought, “so glad it’s the first time I’ve white water rafted since I was 7!” The 4 of us and 2 guides braced ourselves and took the plunge with our raft into the Ocoee River. We were off. We sailed through the fast-moving, white rapids as muffled directions were being shouted from behind us. Forward 3! Forward 2! Backward 1! Lean! These were the commands we had been taught to follow less than 15 minutes prior to our adventure. It signaled which way and how many paddle strokes we should take. There is not a lot that can prepare you for any type of extreme sport. It takes a lot of common sense and adrenaline to make it to the other side of white water.

We made it through the first rapid with no casualties. Then we arrived at a class 4 rapid further down the river. As we arrived at this rapid called The Washing Machine, we were given a general route we’d follow through the water and headed in with our raft. Within 10 seconds, the commands stopped. We kept pushing through the rapid, and then I turned around and realized with a shout, “They’re gone!” We were on our own – 4 semi-novice white water rafters. At that moment, a boulder caught the raft and started to tip us over. We all reacted on instinct by leaning and scurrying to the other side of the boat. We started shouting out commands ourselves until we had pushed off the rock that had caused our unusual event of almost capsizing. We paddled our way fiercely out of the rapids until we found our guides who had been washed downstream along with their paddles. They had been literally whirled around like a washing machine – the name of the rapid was no joke. Talk about an experience. It lit me up with energy and prepared us all to make it down the rest of the river without any other men falling overboard.

Even though we had a high adrenaline trip at the beginning, there were moments where we floated down the calmer portions of the river to see a rainstorm coming up the river towards us. We were only in the rain for about 30 seconds while it beat down on our tense muscles, but after we passed under the rain cloud and turned around, we could see the departing dark, rain cloud moving down the river and breaking through the sunshine as it traveled. The scenery down the Ocoee River is filled with tall, thick tree-covered hills growing up out of the choppy, blue water canyon below. Sadly, we were not able to take an pictures rafting down the river for fear of losing our phones and cameras to the unforgiving waters!

I would definitely recommend rafting down the Ocoee for anyone who is looking for an exciting place to white water raft. If you want to do it on a budget like us, we used a Groupon! Have fun and hold on tight! 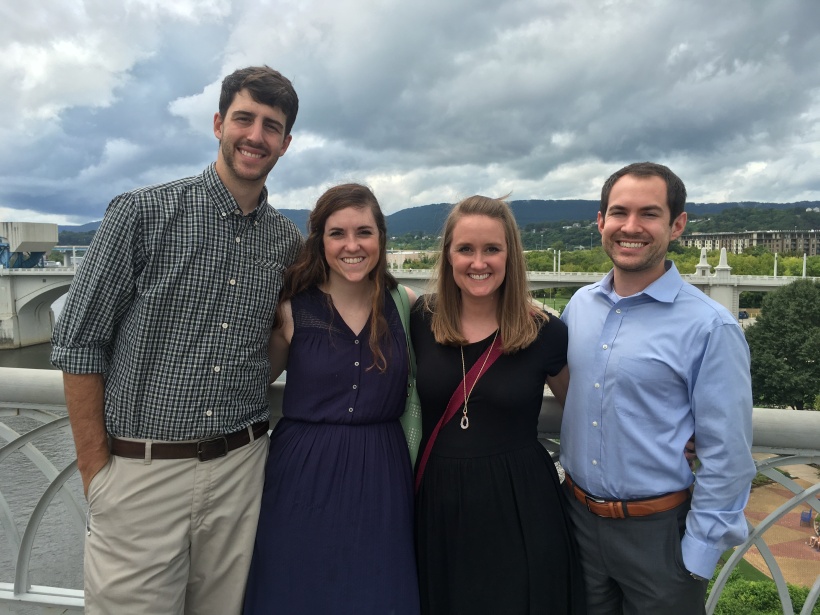 One thought on “River Rafting on the Ocoee”